A very good day at the office!

It's the Club Organiser reporting from the World Seniors Team Championships again, after a dramatic Round 4.

I love chess. especially when I have a game like I did today. Pawn sac in the opening; then a second; then an exchange sac; and then mate to the White king in the middle of the board. And when its the decisive game in the match, its even better. And it also helps a little bit when your opponent has a rating of almost 2200!! We beat Rochade Bielefeld Revival (a bit easier than taking on the whole of Canada like we did yesterday) by the minimum score, despite resting our FM, Andrew Lewis. A quick draw on Board 2 was followed by a brain freeze moment on board 4, where Kevin Bowmer, in an advantageous bishop v knight ending simply failed to move his bishop when it was attacked. But then GM Jim Plaskett stormed to his expected and powerful victory on top board, and I brought home the bacon on Board 3.

Bad news, though, for England 1 who lost 2.5-1.5 to Germany 1 (at least it didn't go to penalties). Losses for Jon Speelman and Glenn Flear with Black not quite balanced by Mark Hebden's win and John Nunn's draw. Hope it wasn't having breakfast with me (name dropping!) that caused Glenn's loss! And now they're only on the same points as us - that would be an interesting pairing tomorrow!

Today's photo would have been another quiz, except that the answer is quite visible if you look closely, which is a shame, as otherwise you'd never guess. Anyway, its former Soviet and now Armenian super-GM Rafael Vaganian. 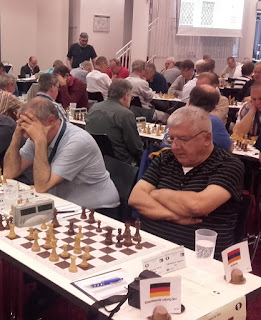 Obviously he deserves a photo due to his chess prowess and career, but he's really here as it gives me an excuse to include a most enjoyable game he lost 40 years ago to the massively imaginative, but also eccentric and ultimately tragic, Albin Planinc. Vaganian deserves the utmost praise for walking into  a beautiful mate and making this a miniature for the ages, whereas if he'd found the right defence, nobody would remember the game at all.

I'm afraid that these reports are likely to become both shorter and less frequent from now on, as Mrs Club Organiser is arriving this afternoon, so tourism will be assuming greater priority. But at least that should provide plenty more photos for me to post!
Posted by Mark Page at 14:25