So last night, ten hardy souls - spread far and wide from Bishop's Tachbrook to Lithuania - sat in front of their computer screens for two hours, and played each other to a standstill at rapid chess (10 mins + 5 secs) in the first ever KCC Online Arena Tournament. At the end of it all, what can I say? ........ except that I won! With a 100% record - as I skilfully prolonged my last game against Jude until it was past the tournament finishing time, so that my abject loss didn't show up in the results! Joining me on the podium were Jude and Ben, while there is a special mention for Algis, who registered the largest rating point gain during the event (+42 if memory serves me right, pipping Solomon by a single point!). 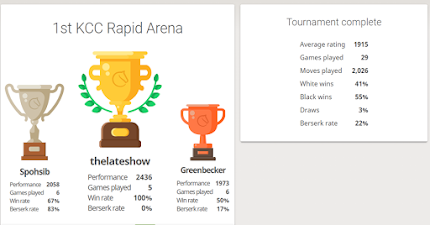 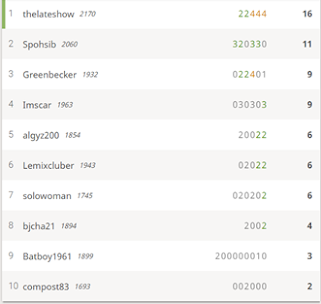 Most noticeable is the considerable variation in the number of games played, with the two Bernards at the extremes. Neither of them quite seemed to get the balance absolutely right. More games theoretically increases your chances of scoring more points, but you do also have to win or draw the odd game for this approach to work! The best way of speeding up the games is to go Berserk, which halves your time (and cancels your increment) but gives you an extra point if you win. But the best strategy of all is to just keep winning, as after you win two in a row you score double points in all following games until you fail to win. Apart from me, though, only Ben was able to get a successful streak going. My Berserk rate was 0%, but for the tournament as a whole it was 22%, which shows what a lot of Berserkers we must have in the club.

And to end, how about this amusing miniature?!