The 4NCL team rapidplay tournament is taking place in Daventry on Saturday 4th October. Full details are available below:

In brief, teams of up to 6 (4 people play in each round), starts at 13:00 with 7 rounds at a time control of 10 minutes + 10 seconds/move. There is no requirement for people to play in the main 4NCL to be eligible, and the entry fee is only £30 for the whole team.

If anyone is interested in playing please do let me know and I will see if we have enough to get a team together.

P.S. As a side note, there is also an individual rapidplay competition taking place on the Sunday 5th, which is free to enter if you are also playing the team event. However, there is no obligation to play in this as well so I will leave that up to individuals to decide. If for some reason you wish to play in the individual but not the team event, that costs £15.

As the start of the new season draws inexorably nearer, a message from Jason Madden at Leamington:

To all LDCL chess players
The League Jamboree takes place on Tuesday 2nd September at the Leamington chess club venue(Home Guard club Portland street).
The Jamboree (traditionally the Leagues curtain raiser) is an easy going competition designed to blow the summer cobwebs off.
Teams of two compete in two pools of strength over four or five rounds to determine the winners. Each team of two must be from the same club and have a combined grade of no more than 280.
Entries to J. Madden
Tel. 01926650115
Mob. 07432660335
Email maddjase@hotmail.com
Posted by Joshua Pink at 12:14 No comments:

What started off as a throwaway posting of me in a snazzy holiday shirt, has developed into a bit of a compulsion for me now, and I'm still not entirely sure where this series is going to stop!

It's one of chess history's strange twists, but two figures who are forever inextricably linked by their momentous (unofficial) world championship match(es), are also inextricably linked in death. Louis Charles de la Bourdonnais (1795-1840) was the victor in the epic struggle against Alexander McDonnell, who featured in the previous instalment of this series. By one of life's (death's?) twists of fate, the two men are buried only a stone's throw apart in Kensal Green Cemetery, in North West London.

La Bourdonnais' grave (2796/SQ 108/RS) lies at the far side of Kensal Green, near the wall that borders the Grand Union Canal. The area is largely overgrown and untended, with most of the headstones now anonymous, but I was pleasantly surprised to discover that la Bourdonnais' is still clearly identifiable, in the shade of a large tree. 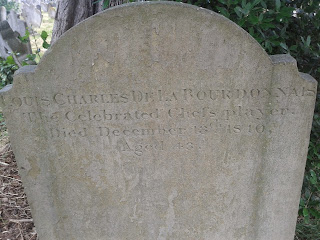 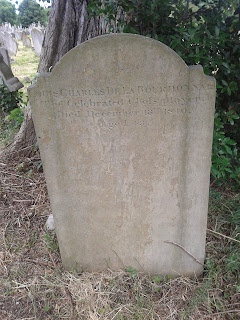 La Bourdonnais is widely judged to have been the strongest player in the world from at least 1824, when he came to London and gave the locals a good pasting, until his death. In 1821 he had also beaten his own teacher Alexandre Deschapelles, and so his reign as "world champion" may have even extended to 19 years.

No remembrance of la Bourdonnais could pass without presentation of his most famous game - possibly the first recorded chess immortal. The final position is truly a thing of beauty.