Just a reminder to anyone thinking of joining Paul, Joshua and myself at this year's British Championships at Warwick University, that the deadline for entries without incurring a late fee is looming. After July 1 it will cost you more, and knowing what a tight fisted bunch chess players generally are, that's something to be avoided if possible.

This will be the first time since 1970 (also Warwick University) that the Championships have come right to our doorstep, and if it's another 45 year's before they come so close to home then most of us had better make use of what is likely to be our last such opportunity. (Sad but true!!)

Full details of all the events are here.

This will be the third time I have played at the British (first time ever in the Championship proper, of course), and my debut was half a life time ago at Southport in 1983. This was my highly enjoyable last round game in the Major Open (which was rather strong in those days), which is as far removed from my current turgid style as it's possible to get. The win took my score to 7/11 - and I will gladly settle for that this time around, too!


When I play through a game like that I sometimes get the weirdest feeling that I used to be a rather dynamic player - but I'm sure that's just false memory syndrome at work! 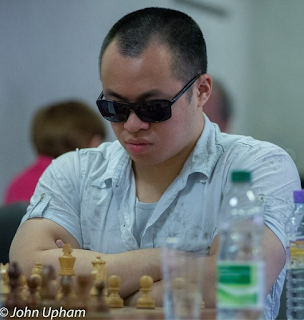 Why would you recommend Kenilworth Chess Club?
It might not be the biggest club, but it’s definitely one of the friendliest. New members can expect a very warm welcome. Club nights are relaxed, highly sociable and terrific fun, even if the chess can be of questionable quality! As Mark Page once said, we all leave our grades at the door of the Royal Oak!
Posted by Paul Lam at 21:03 No comments: 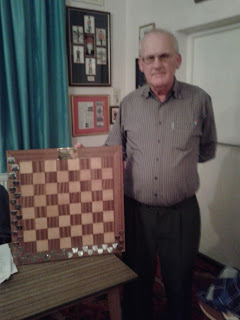 C Team captain Mike Johnson pictured with the Leamington League Division 3 Trophy at the League AGM which was held on June 1. Regrettably your roving reporter was not paying attention at the moment the Trophy was actually presented to Mike by the League Chairman, our very own Joshua Pink, so this will have to do!

Many congratulations once again to all those who contributed to the C team's success in the 2014-15 season.
Posted by Mark Page at 16:43 No comments: