Make mine a double

Since Mark has once again decided he is too lazy to write this report, it falls to me to inform you of the joyous news that Kenilworth has won its first league and cup double since records began (though since no-one seems to have any records, that might not be quite as impressive as it sounds).

We travelled to Leamington with a five person team, and the additional presence of Phil as a non-playing captain (his only contribution to the evening being to lose the toss so our opponents had three whites) and Dave as a spectator meant that fittingly all seven people who have played in the A team this season were present for the match. The only negative was that since all the cup finals were being held in the same venue it was somewhat crowded, so rather difficult to watch the games on other boards. Consequently I will apologise in advance for any errors in my game summaries caused by attempting to discern what was happening form halfway across the room.

Four of the five matches ended in draws. Paul ended up in a slightly worse position with black against Alan Lloyd, playing a reverse Grand Prix attack (1.c4 Nc6 2. Nc3 e5 3. g3 f5), but with some precise play was able to equalise, and a very early draw was agreed. Mark's game, I think it is fair to say, lacked a consistent narrative thread. In a somewhat eccentric King's gambit position (1. e4 e5 2. Bc4 Nc6 3. f4 Qh4+ 4. g3 Qe7) I was of he opinion that Mark was slightly worse out of the opening with white. Coming back 15 minutes later he had an absolutely crushing position after his opponent wasted a number of moves putting his pieces on much worse squares. The next time I came back his opponent was a pawn up with probably a winning endgame, the time after that Mark was once again winning, but very short on time, and on my final return a draw had been agreed. Either a very complex game that I was unable to fully understand the subtlety of, or lots of blunders that ultimately evened out.

Andy Baruch was playing a dangerous game on board 3, attempting to unbalance the position against an opponent who seemed content to play for a draw with white. Fortunately, just as it looked as if he had pushed too far and was in danger of falling into a difficult to hold endgame, his opponent rather generously accepted a draw. I am not sure the rest of his team will have been too happy about this in view of the final result. Finally, on board 5, Carl completely outplayed his opponent, reaching an endgame two pawns ahead. Unfortunately, it was a notoriously difficult to win opposite coloured bishop endgame. A discussion took place away from the board, with Mark and Andy of the opinion Carl had a win, whilst I was arguing in favour of a draw. Much to my surprise, and despite Carl winning a third pawn, I was proved correct and there was simply no way to make progress, so Carl finally had to agree to a draw.

This leaves just one game left to discuss, as Kenilworth's leader, star player and emotional inspiration was playing on the forth board. Since everyone already knows the result, I will just leave you with the game itself, so everyone may bask in the brilliance/tremendous amount of good fortune that is my play.

All those of a nervous disposition should look away now! Here I am a few years ago paying homage at the grave of the great Paul Morphy, unofficial world champion between the years 1858-61. The Morphy family tomb can be found at the St Louis No 1 Cemetery in New Orleans. (Slightly dodgy area - I recommend going on a guided walking tour!) You would think I could have chosen to wear something slightly more respectful, wouldn't you?! As I don't have anymore photos of me at famous chess-players' graves, number 2 in this series could be a long time coming! 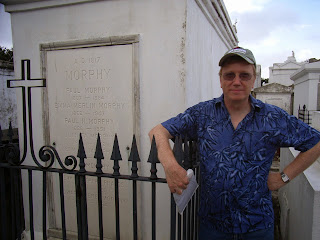