Just when you thought my morbid tendencies had run their course, I'm afraid I have to disappoint you with another instalment of my latest riveting series. (And I have more to come, too - you have been warned!)

The small island of Mallorca was the scene of the very famous Palma Interzonal in 1970, when Bobby Fischer scored a great victory with 18.5/23 - no less than three and a half points ahead of Larsen, Geller and Hubner who tied for second with 15 points. Also qualifying for the Candidates matches were Taimanov and Uhlmann with 14 points. Both Taimanov and Larsen may have subsequently wished they hadn't qualified given what Fischer did to them (6-0 in case you didn't know!)

So the chess connection is well established, which gives me an excuse to present a couple of photos of the grave of the famous poet and novelist, Robert Graves - how appropriate is that?! Graves (1895-1985) is best remembered for I Claudius, though presumably most people, myself included, only know that work through the brilliant BBC serial of the 1970s rather than the original novel. He spent much of his life in the beautiful Mallorcan village of Deia, about 30 km north of Palma, high in the Serra de Tramuntana, though a more local connection for us is that, surprisingly, he attended Hillbrow School in Rugby for a time. Graves' former house is now a (very interesting) museum and he is buried in the cemetery adjacent to the village church of San Juan Bautista. Rather annoyingly for me - as I like to be the first to document such things - there is a picture of Graves' grave in his Wikipedia entry, but I am able to present original images here, courtesy of Mrs Club Organiser. So blame her for the fact that the gravestone inscription is almost illegible! (But it was a very sunny day and a very light coloured stone, so go easy with the criticism, please.) 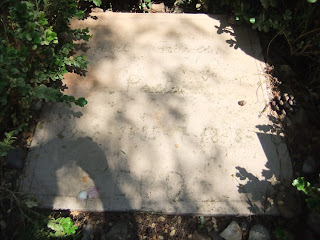 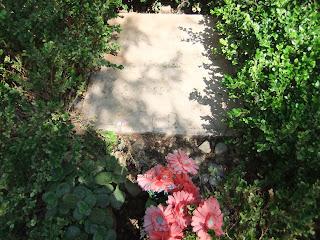 And the chess connection is actually even stronger than I have so far made out, since in a few weeks time, another major event will also take place in Palma de Mallorca, with the staging of the fourth and final leg of the Fide Grand Prix series, from which two players will qualify to the Candidates tournament to determine the next challenger for Magnus Carlsen. I'm sure you will be joining me in hoping that nobody scores enough points to oust my favourite player, Alexander Grischuk, from his current qualifying position.

No joy for plucky little Kenilworth (population 22,413 in the 2011 census) against giant Banbury (46,853) as Division 1 of the Leamington League spluttered into life in Oxfordshire last night. While Banbury A were relegated last season, their B team was not, and suitably rebranded as Banbury A they wheeled out their strongest possible team against us. Despite that, and some fairly serious absentees on our side, the two teams sported almost identical average grades though, this hid big discrepancies on the top two boards.

Andrew strove manfully to defy a 30 point disadvantage against James Jackson on Board 1, he ultimately went down in an ending where black's 2 bishops were too much for Andrew's 2 knights. Crucially, the white king was incarcerated on h2 and could never get out. I had a 20 point edge over Gary Jackson on Board 2, where we continued our "debate" in a variation of the Najdorf. I tried something slightly different and it worked a treat, though only after Gary missed a chance to trade queens in the early middle game. From then on his king, which had castled queenside, was in big trouble. Once the a-file was opened it was inevitable mate, and the score in the "debate" went to 4-0 in my/Najdorf's favour!

Mike took the fight to Georgs Vikanis on Board 3 - at least to a certain point. Unfortunately he then made a relatively early draw at a moment when this virtually sealed our match fate. Because while not as bad as the terminal accident that befell Bernard C on Board 4 at Banbury at the end of last season, Ben had unfortunately also made a complete Horlicks of the opening against Carl Portman. He was basically losing from a very early stage as he could hardly move. One pawn was shed to try and get some activity, but it hardly improved matters. He eventually made it to a king and pawn ending, but as Carl had two connected passed pawns on the sixth rank supported by his king, the result was inevitable.

So not a great start to the Division 1 season, but with 60% of the first team squad spending the evening in somewhere other than Banbury such results can hardly be thought surprising. As the largely forgotten American singer/songwriter Steve Forbert once wrote, "You cannot win if you do not play."