Kenilworth C are Champions of Division 3

Many congratulations to Mike and his players for clinching the Division 3 championship on Thursday night, as a consequence of Solihull D's loss to Stratford C. With one match still to play, the C team are uncatchable at the top of the table, sporting a current record of Played 15, Won 10, Drawn 3 and Lost 2. Thanks to Stratford C's slightly surprising win, our team are spared the prospect of a winner takes all final match shoot-out against Solihull. The fact that this match is scheduled for April 1st makes me think it wouldn't have been without drama!

Next season we will face the interesting challenge of fielding two teams in Division 2, with all the organisational headaches that entails - hopefully we will be up to it. And at least we'll have something interesting to talk about at this year's AGM. Anyway, I think this calls for a celebration!

Some competently played chess (for once)

It may not have been the most inspiring season for the A team, but we have at least now had one impressive result, namely our recent 4-0 victory over Banbury B. I will get through the uninteresting games quickly, so we get to the main event. We had a considerably rating advantage on the bottom three boards, so a positive score could probably have been expected. However, it didn’t look massively clear after the first hour or so. After generously moving myself up to board 2 to give Mark the white pieces (after he had spent many weeks moping about how many blacks he has had this season), I found myself in a very level rook and minor piece endgame, whilst Mark had conspicuously wasted the white pieces by not doing very much in the opening. Carl meanwhile, had managed to reach a position two pawns down where it wasn’t obvious he had any compensation at all.
Fortunately things improved quickly, as my opponent blundered away a crucial pawn in the opening, Mark outplayed his opponent into a serious endgame, and Carl launched into a semi-sound rook sacrifice which, after some less than optimal defence, led to him giving mate only a few moves later. This leaves me with only the top board left to mention, where Paul had an excellent, and remarkably smooth, win (presented at the end of this article) over James Jackson. After consulting the archives of the Leamington League i.e. asking Bernard, we believe his grade of 224 makes him the highest rated player in the league’s history, and this was the first game in it he had ever lost (indeed, the first he had not won). A fine achievement, made even more so by the fact that both Mark and myself, as Paul’s time ebbed away, were rehearsing how to commiserate with him for losing on time from such a promising position.

I wouldn't presume to comment on such a well played game, so I will restrict my thoughts to the opening Paul's opponent chose, namely the hippopotamus. Many people this cramped position was named after the style of said animal, lurking low in the water before launching into action later on, but this is a misnomer. In fact, it is simply that is one were to ask a hippo (not the strongest of the chess playing animals) what opening one should pick, this is exactly the sort of awful position you would expect to be in. The moral of the tale, in so far as there is one, is that if one must rely on fauna for opening tips, the correct order to take advice in is hedgehog, orangutan, vulture, snake, elephant and only then Hippopotamus. Bonus points are available to anyone who knows all those openings.
Final result: Banbury B 0 - 4 Kenilworth A
Next up, undefeated league leaders and soon to be champions Olton A. I expect another crushing win, particularly as I shall not be there to drag the team down.
On another note, I thought I would present the opening from one of my games at the recent 4NCL weekend, which I ultimately won (after Paul’s game, below). I do this not as the game was massively exciting or well played, but just to show that a) in spite of my scoring 0.5/10 from my last 10 games at the Royal Oak recently, I can occasionally actually win games of chess and b) when I play ridiculous openings there, I am not doing it for the sake of it but genuinely trying to come up with what may be useful ideas, as I believe this one I have found might be.

Graves of Famous Chess Players: No 7 in a Series of 7

Finally, we reach the end of the road on this series (for the time being!), and our last visit takes us back to Brockley and Ladywell Cemetery in South London. Not far from the grave of Samuel Tinsley (see the previous post in this series) lies the last resting place of an altogether more eminent British chess player - one of the greatest of all, in fact - Joseph Henry Blackburne (1841-1924). 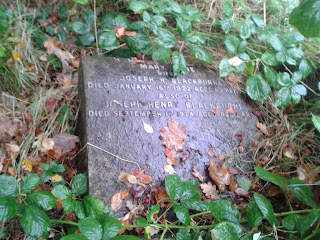 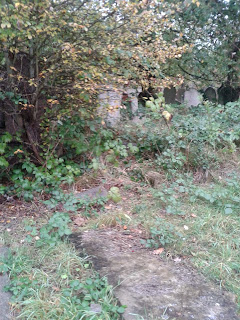 The grave, shared with his third wife Mary who predeceased him by two years, is sadly neglected and untended, with the headstone now horizontal. Once again I was totally indebted to Martin Smith's excellent research on the Streatham and Brixton Chess Blog for locating the grave so easily. His fascinating article on both Blackburne and Tinsley is well worth a read here.

Born on the same day as me, just the small matter of 113 years earlier, Blackburne was amongst the world's top five players for the best part of 20 years, between about 1870 and 1890, while according to the Chessmetrics website, he reached a peak rank of number 2 on no less than 77 monthly lists between September 1873 and February 1889. His peak Chessmetrics' rating was 2748 in August 1886, when he was very nearly 45 years old, while his peak performance of 2785 was achieved the following year at Frankfurt, where he scored 10/12 against average opposition of 2613 strength. Even as late as his early 60s, he was still amongst the 20 best players in the world, so there is no doubt that we are talking about a genuine chess superstar.

Famously nicknamed "The Black Death", he notched up major tournament victories at Vienna (1873, equal with Steinitz who beat him in a play-off); London (1876, ahead of Zukertort); and Berlin (1881, no less than 3 points clear of Zukertort). He was also victorious in matches against Gunsberg and Zukertort (though he also lost matches to each of these players) and he was well beaten on the two occasions (1862 and 1876) he played matches against Steinitz.

His longevity gives us all hope. He won a brilliancy prize (against Nimzowitsch) in 1914 (at the age of 72), and in the same year tied for first in the British Championship, but could not contest the play-off due to ill health. He was still reportedly giving simultaneous displays at the age of 78. He died of a heart attack on September 1, 1924, at the age of 82.

And so to a game. It can't get much better than beating the reigning World Champion with the black pieces in your home country, so there could really only be one choice.