Take a look at the following list of famous names, which I present in alphabetical order:-
A slightly eclectic and perplexing selection, you might think, and possibly you'd be correct, but at this stage your task is easy. Just put these 9 into what you think is the correct order of their ability. And if you're thinking that you can't compare across different periods in time, well you're only half right. Since 1970, when FIDE adopted the ELO system, we have ratings that cover the last 47 years, but what about before then? Well, there is the Chessmetrics website, where Jeff Sonas has produced an incredibly detailed retrospective assessment for the period 1840-2005. The two systems are not really interchangeable, but this is a quiz amongst friends (isn't it??) so I'd be quite prepared to accept a combination of the two. But ..... before you rush off to check out the ratings that you can derive from these two sources (and I know you were going to), I can save you the trouble, because I've already done it, with the following result:-

So there you have it, Capablanca was apparently slightly stronger than Alekhine, with Steinitz best of the rest. And at the bottom come the two who you probably thought shouldn't have been in the list at all. Albeit, still sporting ratings of which we can only dream.

Not much of a quiz, was it? I've seemingly given you the answer. Only I haven't, because the correct answer to my question is the following ranking list, when the only female on the list goes from last place to first:-

If you're not thinking that you could put together one hell of a team in the U-120 or U-700 Cups from these, you're probably thinking I've taken complete leave of my senses. How can this order of ability possibly be right? And why would they have such lowly ratings??  But rest assured, there is method in my apparent madness.

And the question for you, dear readers, is to explain the circumstances in which my ranking list could be absolutely, definitively and unarguably correct.

Happy cogitating. I'll post the answer in a week or two, though I'm sure you'll all have solved the conundrum by then.

There was no red carpet at the Abbey Club last night (in a former Conservative Club? - come off it!) as the 2017 AGM saw the announcement of this year's Player of the Year (POTY) and Clubman of the Year (COTY) awards.

Taking home the impressive (?) Tilley Trophy as Player of the Year was club stalwart Phil Wood, whose sterling efforts on behalf of the B team saw him amass 11 points from 14 games (+10 = 2 -2) for an excellent 78.6% performance. He follows in the illustrious footsteps of Joshua, Roy and Andrew as a winner of this prestigious award, with the second highest winning percentage to date. Honourable mentions to myself (70.0%), Dave Shurrock (66.1%) and Mike Donnelly (60.3%) for occupying the minor placings.

History was then made as the Club Organiser unilaterally decided that the extremely impressive (????) nameless trophy for Clubman of the Year would once again go to Ben Graff, making him the first person ever (which means the last 4 years) to win a KCC Oscar twice. Can he make it a hat-trick next year, I wonder? Its a tall ask (even Red Rum couldn't win the Grand National three years in a row), but given his massive efforts on behalf of KCC (40 competitive games in 2016-17) and of the Leamington League as a whole, only a fool would write off his chances. Especially with me once again making the decision!

Some other club business was undertaken at the AGM, but if you weren't there you'll have to wait for me to circulate the Minutes to find out if anything important was decided.

Anyway, congratulations to Phil and Ben, not only for their award winning efforts over the past season, but also for refraining from making any tearful acceptance speeches last night.

For the time being I've run out of famous chess players' graves, so when I unexpectedly came across the grave of a famous non-chess player while on holiday the other week, I thought it was a sign that I should move on to another KCC website series. But clearly, just any old famous person won't do at all on a serious chess blog like this. There has to be a connection of some kind to justify their inclusion.

So to kick things off, I present the impressive tomb of Henry Fielding (1707-1754). Most famously he was the author of Tom Jones, the first great English novel - which just happened to be the subject of my dissertation at university. Instant qualification for this blog post! 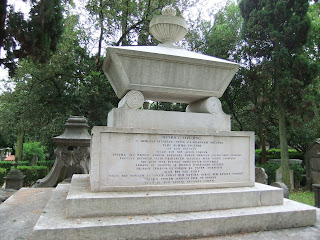 Fielding died in Lisbon at the age of just 47 and is buried there in the graveyard of St George's Church (also known as the English Cemetery.) The place is not too dissimilar to those atmospheric Victorian cemeteries in London which house the graves of so many great chess players, albeit rather less wild and overgrown. Perhaps not surprisingly, Mrs Club Organiser and myself were the only tourists present on a pleasant Sunday morning in May. Surely all these cemetery visits don't mean I'm weird, do they??

Anyway, I promise to return to chess matters next time!
Posted by Mark Page at 15:07 1 comment: 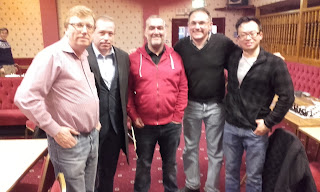 A miraculous victory for Kenilworth tonight in the Leamington League Open KO Cup Final! We triumphed on tie break (board elimination) after a dramatic and eventful 2.5-2.5 tie with Olton. There were wins for myself and Paul and a draw for Ben, while Andrew and Carl bit the dust. Remarkably Black scored 4.5/5!

Paul's Cup-clinching victory over Phil Holt on Board 1 was truly epic and came after Paul offered a draw with the match score at 2.5-1.5 to Olton - only for Phil to turn it down!! Neither player had a clue what was happening in the match, which was just as well for us!

A full match report will follow in a day or so. I'm catching a plane at 7.00 tomorrow morning, so Ben will do the honours on that score. Hopefully the Social Secretary is already working on the celebration dinner!
Posted by Mark Page at 23:37 No comments:

I'm In The Money!

Despite perennial champion Phil Holt being absent, Olton once again annexed the 2017 LDCL blitz championship, courtesy of a remarkable 9/9 performance from Alan Lloyd. I managed to pocket the princely sum of £7 (yesssss!!) for coming second with 7/9, but as the number 1 seed, I felt this was definitely an opportunity missed. However, I guess I'm simply not as sharp as I used to be. (And I wasn't that sharp even then!)