How about club members putting in a team for the National Club Championships 2014?

The format has changed and the old style KO rounds with teams having to travel great distances to play each other, usually on a day in the weekend has been dropped. Instead the whole event will be held in the space of one weekend - this year the last weekend of April, ie the 26th & 27th. The venue is a hotel near High Wycombe. For the details follow this link:

I would suggest we have the strength within the club to field a team of four in the Under 175 Section, the Major. The average of the grades of any team being fielded for a match has to be below 175, and anyone who is graded less than 125 will be treated as having a grade of 125 for the purpose of calculating the average.

As a for instance the following six people might be interested that I know of (which is not to say they actually are):

which would mean the strongest team possible still comes in at under the limbo bar of an average grade of 173.75. This selection of club members is on the basis that each member either plays in the 4NCL, weekend congresses, or one of the three major events that last more than a week.

If there are others lower down in the ranking order would want to take part there of course are the Intermediate (under 150) and Minor (under 125) available, for a weekend away playing four serious chess games which will be submitted for grading for the July 2014 List.

The New Year got off to a very good start for Joshua Pink and Roy Watson, as they made a successful smash and grab raid on the prize fund at the Shropshire Congress in Telford. As they are both far too modest to trumpet their own successes, I thought it important to bring news of their triumphs to a wider audience.

Star of the show was Joshua who was clear first in the Major tournament with a very impressive 4.5/5, which netted him the not inconsiderable £300 prize. He is seen taking possession of the cheque below. 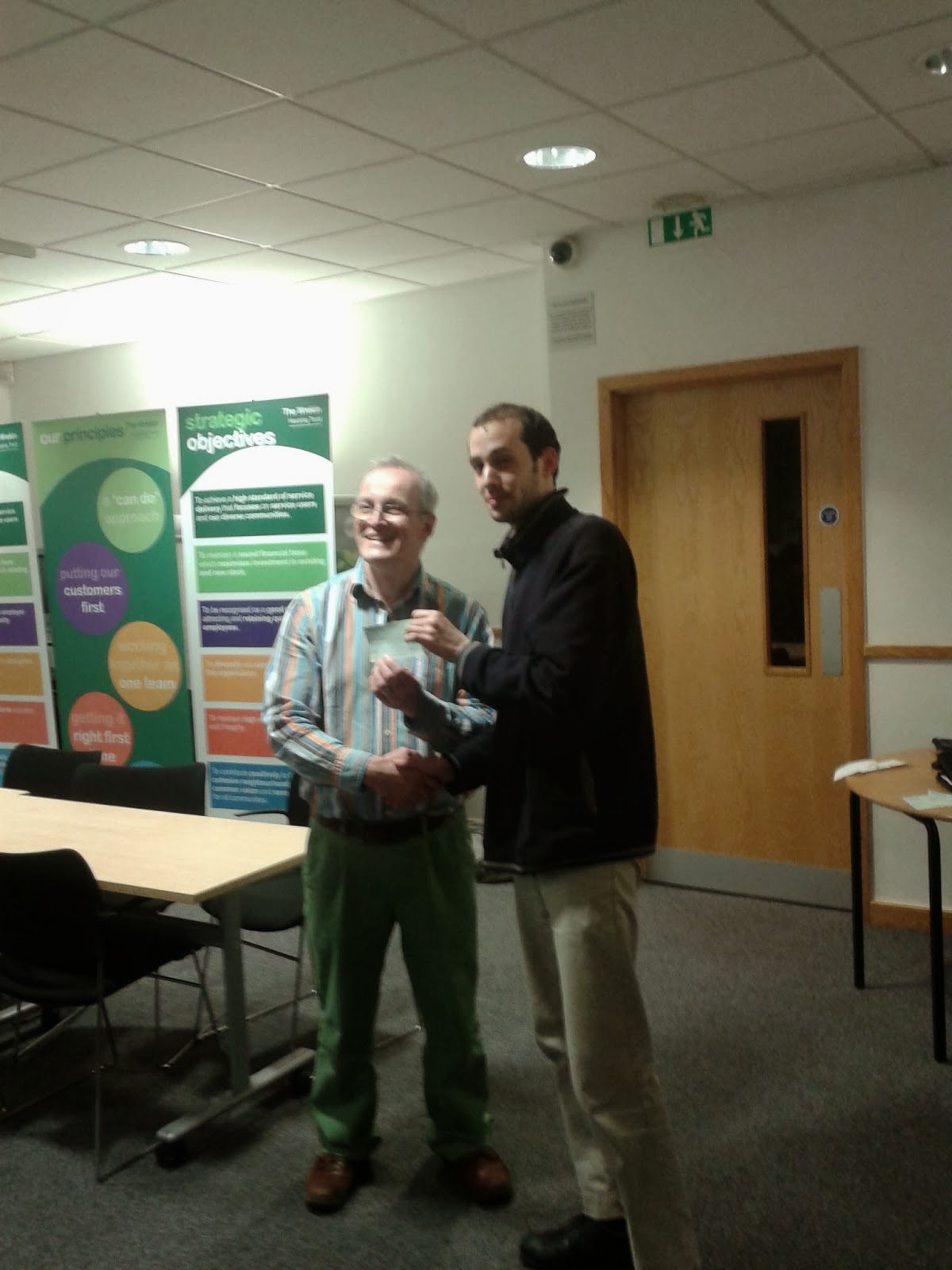 Roy was also in the money as part of a 5-way tie for second (4/5) in the Minor, and was pleased to pose for the mass ranks of paparazzi with his (somewhat smaller) cheque! 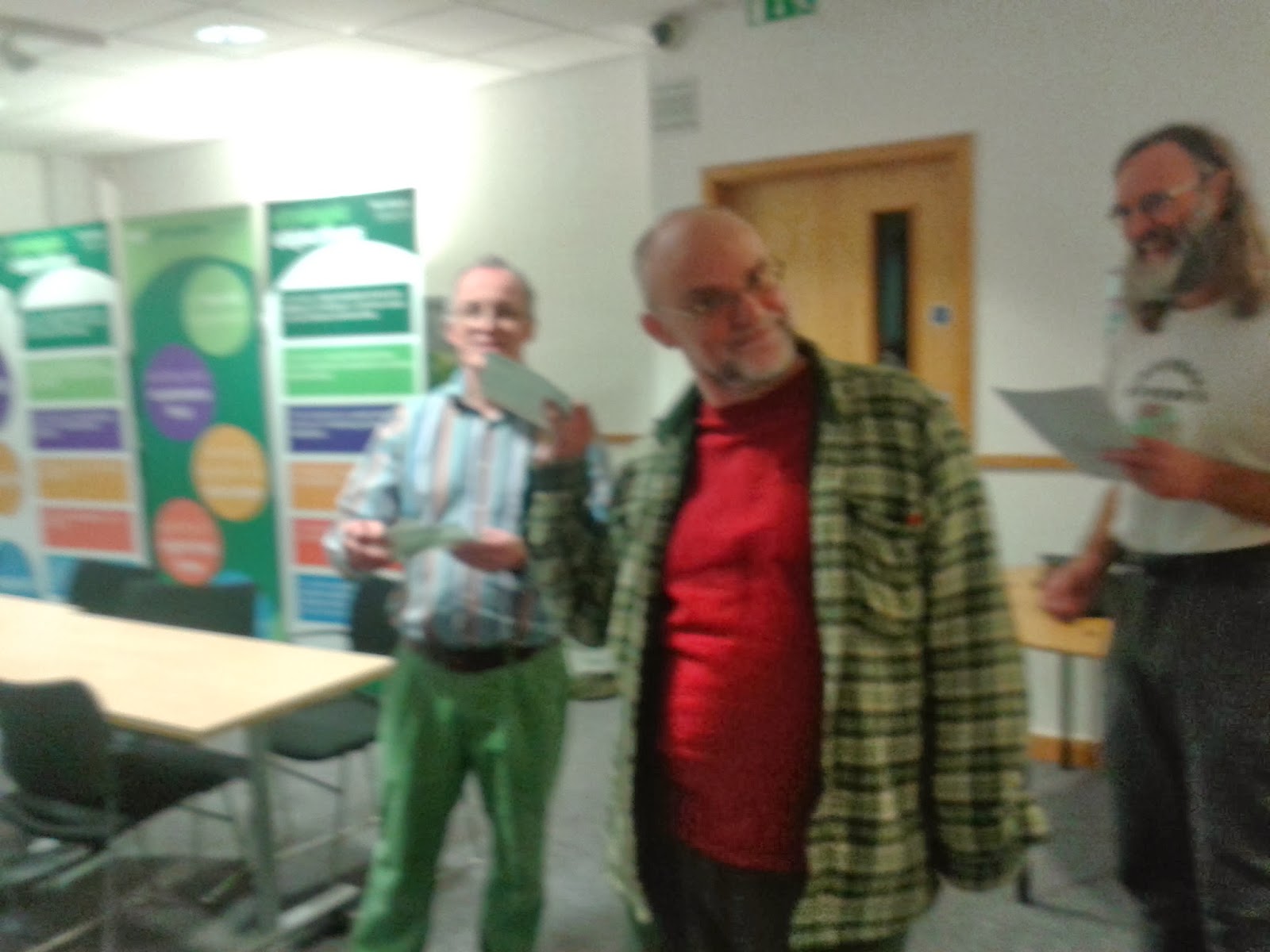 Myself and Bruce also played, but we don't need to go into any more details about that just at the moment.
Posted by Mark Page at 12:33 No comments:

Since we now have this website, I feel I might as well take advantage of it to give everyone a good laugh about how incompetent most of the games I play are. This has the dual benefits of showing people that you can get to quite a reasonable grade whilst still really having no clue what you are doing or why, and of reassuring them that however bad some of your moves or games might have been, I have played something much worse.

I can also use it as a platform to illustrate some of the important rules of playing chess that I have discovered over the years, which I feel have been somewhat neglected by the usually cited reference texts. The first three of these would be:
In order to help illustrate the value of these maxims, I present a game I played yesterday in the semi-finals of the Leamington individual tournament. I adopted the sensible strategy for this game of getting a decent position out of the opening, then horribly misplaying the position until I was much worse, then waiting for my opponent to blunder and allow me to win. I think we can all agree this is how chess should be played. If anyone can improve on my slightly sketchy analysis, and show how the game should have been played, that would obviously be appreciated.

For all those interested, the January 2014 grades have now been published:

Due to the large numbers of people looking this morning (after all, who can wait even five minutes longer than necessary to check their own personal arbitrary number) the website keeps crashing, but hopefully that should be fixed soon.

As a side note, I think we may have set some kind of record for the club with the most stable grades, as we have 4 people who have contrived to remain on exactly the same grade (despite playing games), and another 8 on top of that who have changed by less than 5.
Posted by Joshua Pink at 10:35 No comments:

These are dark days indeed for all England cricket fans and, judging by his performances on recent Thursday nights, one KCC member in particular seems to be something of a broken man. Of course, it might well be thought that this is just a resumption of the natural state of things, and that the last few years, when we actually gave the Aussies a good spanking, were nothing but an aberration. History definitely suggests that the boys from down under have the upper hand over us Poms on the sporting front, but in fact it wasn’t always so, and if we go back far enough, we’ll even come across a series of English triumphs by yours truly!

In 1984 my then employers had, rather generously, sent me to Australia for 6 months to work in the Sydney and Melbourne offices.  In Melbourne my chess was restricted exclusively to blitz events, but when I moved to Sydney, things got more serious. I joined Hakoah Chess Club (who played at Bondi Beach) and scored 5.5/6 on Board 3 in the first division of the Sydney League during my brief stay.  My greatest successes over the old enemy, though, came one week-end in May 1984, when, in successive rounds, I took the scalps of two former Australian champions.  First up, was the 1970 champion.


This was the last round on the Saturday evening, and with 3.5/4 I knew I’d get someone rather good on Sunday morning.  As it turned out, up stepped a former double Australian Champion, John Purdy, (admittedly from back in 1955 and 1963!) to try and put the Pommie upstart in his place.


I suppose it would be churlish of me not to record that the tournament was actually won by future GM Ian Rogers with 5.5/6, and that my very best move of the weekend was to avoid being drawn against him.  I finished 2= with former NZ champion Craig Laird on 5 pts.

But it gets even better. Continuing the cricket theme which started this article off, I can actually claim a hat trick of Australian champions, because long before I ever set foot down under, I had enjoyed a delightful, though totally unsound, win over Daryl Johansen, who has subsequently racked up a record 6 Australian titles (1984/88/90 and 2000/02/12) as well as gaining the GM title in 1995 and appearing in 14 Olympiads.  It would be highly remiss not to finish with this enjoyable romp.


This article and accompanying games first appeared several years ago on the web site of Correspondence Senior International Master Mike Donnelly (a Kenilworth resident) http://chesspagesofmikedonnelly.co.uk/ - which is well worth a visit.
Posted by Joshua Pink at 14:32 1 comment:

The Season So Far

Christmas marked the half-way point of the Leamington League season, so here’s a brief summary of how our four teams are doing so far.


The A team went into the New Year in first place in Division 1, despite some less than convincing performances. Certainly our form has not been as impressive as last season, but luckily others also seem to have been playing worse. The league looks like being a four way fight between ourselves, Shirley, Daventry and Stratford, with perennial champions Olton A currently well off the pace. Our 3-1 win over them was the highlight of the season so far, with Paul Lam scoring a massive win on top board. We kicked off 2014 with a slightly disappointing 2-2 draw against Shirley, where I conspired to lose from an advantageous position, thus cancelling out a good win by Andy Baruch.  But everything’s still to play for - could this be our first title since 1988?


The B team has been finding the going tough in Division 2, and has suffered from being unable to have anything like a settled team – ten players used so far! – and a couple of defaults have not helped. (Though on one occasion Stuart responded manfully to an 11th hour call and allowed us to field a full team.)  2014 has started well, though, with an excellent draw away at Leamington even though we were heavily outgraded.  Stuart (again!) and Dave Shurrock were our two heroes from this match, and subsequently we only just went down by the minimum margin against runaway leaders, Solihull A. It’s a great shame that Joshua has had to miss a few matches due to clashes with the Coventry League, as he has racked up a very impressive 5.5/6 so far on Board 1.


Much more success to report for the C team in Division 3, where we currently lie joint top with Solihull C, albeit having played a game more. Mike, Nick and Rod have been the mainstays of the team, though when players were short, Mike roped in Daniel Rowlands from Coventry and a long time inactive (and ex Coventry team mate of mine) Royal Oak visitor, Eddie Gibson, to complete the team – and they notched up 3/3 between them!


The D team has not been setting the world on fire so far and currently sit next to bottom of Division 4. We can only hope for an improvement in the coming months – onwards and upwards!
Posted by Mark Page at 13:36 1 comment:

Welcome to the new website for Kenilworth Chess Club. This page is still in the prototype phase and thus any comments or suggestions for changes/improvements are welcome. Please leave these either as comments on this post or email to imscar1986@gmail.com
Posted by Joshua Pink at 11:57 No comments: