Well, here we are again and amazingly we still find ourselves in the romantic, semi-wilderness of London's High Victorian Kensal Green cemetery. Not far from the neglected grave of Charles de La Bourdonnais, unofficial world champion for at least 16 years (1824-40), stands an altogether grander and more imposing monument to England's only claimant to such a title. At plot 24419/SQ71/RS can be found the last resting place of the chess titan who was Howard Staunton (1810-74). 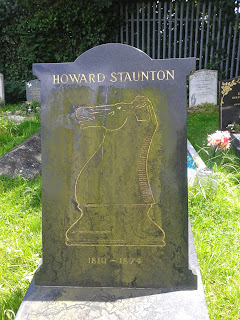 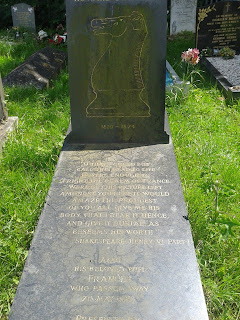 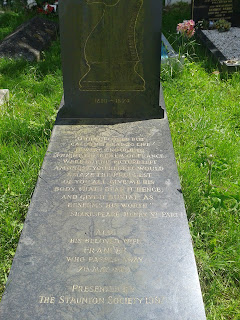 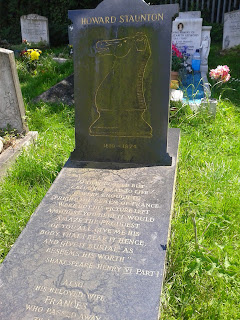 Thanks to the efforts of the Staunton Society, a new memorial and headstone were created in the 1990s, although these are already showing some ravages of time.

From the time he beat the Frenchman Charles de Saint-Amant in Paris in 1843, until he lost to Adolf Anderssen in London (1851), Staunton was recognised as the world's best player. According to Bobby Fischer: "Staunton was the most profound opening analyst of all time. He was more theorist than player, but nonetheless he was the strongest player of his day... In addition, he understood all of the positional concepts which modern players hold dear, and thus - with Steinitz - must be considered the first modern player."

Praise indeed, but there is more. Of course, every chess player around the world knows Staunton because of the eponymous design of chess pieces we all use - and will till the end of time, I dare suggest - but he also organised (and played in) the world's first ever international tournament (London 1851); wrote a best selling book (The Chess Player's Handbook); and wrote a highly influential chess column in the Illustrated London News for nearly 30 years. But despite all this, he has hardly left us a single famous game. And his posthumous reputation was forever tainted by the controversy of his "avoidance" of a match with Paul Morphy. The game below is no Immortal Game, or Evergreen Partie, but it does feature a positional exchange sacrifice (at a time when such things were hardly known) followed later by some nice tactical flourishes to produce a winning endgame. And it was played by an English "world champion". We aren't going to have one of those again for a long, long time.