That's the Kenilworth Chess Club Online Speed Chess Grand Prix, in case you hadn't worked it out. Which you surely had. I mean, how much easier could it be?

Anyway, as we have now had three of our monthly Lichess Arena Club Tournaments, and stand on the thresh-hold of a fourth (Thursday, February 4th) - and as we seem set to be stuck with online chess for the foreseeable future - I thought we should make things more interesting by having a season long competition to supplement the individual monthly tournaments. And as the only sporting event I could think of that matched our competition for thrills, spills, glory, drama and danger was Formula 1, I decided to model the season long Grand Prix on the same scoring system. So the top 10 finishers each month, will score points ranging from 25 for 1st place, down to 1 point for 10th. Which is quite a good fit, seeing how the numbers for the first three events have been 10, 9 and 11! Points for (almost) everyone!

Now one big problem with this idea, is that no-one has a clue how long the current state of affairs might last. But we don't let inconvenient facts like that get in the way of a good idea, especially when the current Grand Prix table shows the Club Organiser in first place, after winning two of the three events held so far. 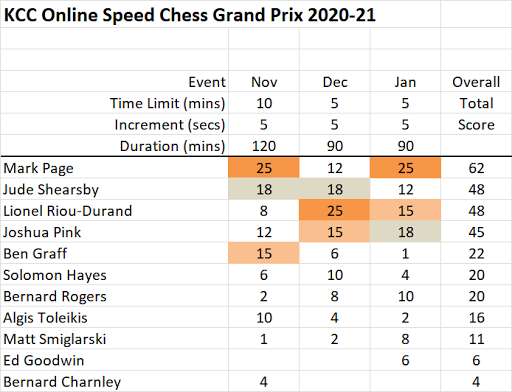 (The shading is supposed to indicate Gold, Silver and Bronze placings, by the way. It helps if you are a bit colour blind!  Already, no-one has been on the podium every month.)

Now it may be a good idea to adjust the scoring so that people can drop their (one, two, three?) worst scores, but until we know what system optimises my winning chances, correction - how many months this is going on for, its difficult to make a mathematically sound decision about this. (For which I will of course be relying on the input of our resident mathematical genius, Doctor Pink.)

Stand by for an updated table after next Thursday's event, which will see the first Blitz tournament in the speed chess series. I predict a surge towards the top of the table for Jude!