The March edition of our monthly online arena tournaments on Lichess, saw us leave the straight and narrow and try our hand at the abomination that is Chess960/Fischer Random. I had never previously played a single game of this mongrelised version of chess, but being a shameless pot-hunter (no matter how small, or even non-existent the pot) I obviously threw my hat in the ring to try and defend my position atop the Grand Prix leader board.
But, alas, the effort was in vain, since for the second month running Jude emerged - at the end of 2 hours intense play - as a clear winner, and in the process he jumped to first place in the Grand Prix table. And this despite conceding two games to absence/disconnections. But with a couple of successful berserks at the start of the event, and a speed of play which the old codgers in the event just couldn't match, Jude finished two points ahead of Joshua, who owed his silver medal to my failure to draw the most elementary rook and pawn ending ever in our individual encounter. Bizarrely, I was the only person all night to build up a head of steam and secure even a single double points win, but after this rip-roaring start I went downhill and was massively relieved to finish a point ahead of Solomon and Algis, who both showed a great affinity for this version of chess. In fact, Solomon can consider himself very unlucky to miss out on the podium, as he not only had the highest rating performance of the tournament, but his 4 wins from 5 games had the single loss (to Bernard R) right in the middle, so he missed out on any double points wins. Timing is everything, it seems! A rather less positive shout out to Ben, who had a terrible night. And to think it was his idea to play Chess960! (Though I have to say it was indeed a great idea, and (surprisingly) I enjoyed it so much I might well try it again!!) 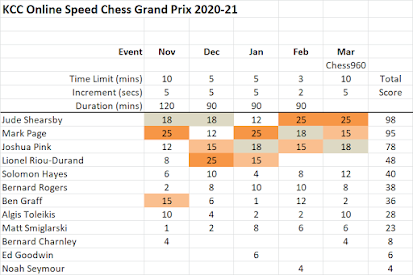 Lionel's absence from a second consecutive event has seemingly scuppered his chances of Grand Prix victory, and it almost looks like a two horse race now, as Joshua would need a couple of wins - and for Jude and me to underperform badly - if he is to mount a challenge. But you'll notice, I did say "almost" - as I haven't yet decided on the final rules. I may yet opt for a "best x results" scoring system to determine the winner - where "x" is a number that I have yet to decide upon! Moreover, nobody (myself included) can be absolutely sure how many more legs this Grand Prix is going to have. Eventually all will become clear when I unveil the KCC roadmap out of lockdown  - though if I were a betting man (and with the Cheltenham Festival starting tomorrow, I may well be) I would make 3 the strong favourite.
April's event - duration and format yet to be decided upon by the Tournament Committee - will take place on Thursday, April 1st. Now, why is everybody laughing? I just don't see what's so funny, myself.
Posted by Mark Page at 15:24