Second Wave of GMs Invade Kenilworth - or at Least Get Close!

Last weekend's 4NCL tournament at Woodland Grange, on the outskirts of Leamington, saw more GMs in the Kenilworth vicinity, after the recent swarm who attended the English Championships at the Holiday Inn. (Which really is in Kenilworth.)

How many can you spot and identify in this picture? 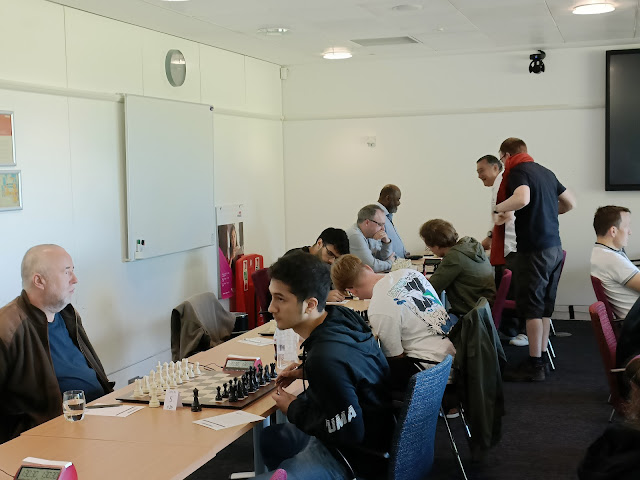 Well, the correct answer is 3, and they are: Nigel Davies (extreme left); Danny Gormally (second from top on the left hand side of the table); and the man who can't stop winning money in Kenilworth (and its environs), Mark Hebden (standing, furthest away).

Joshua had the privilege of playing GM Hebden (a member of England's World 50+ Team Champions) in Round 1, and had the temerity/chutzpah to try the King's Gambit against him. A brave call given that my database has 49 games with Hebden on the White side of this opening, including a win against Lev Psakhis and a draw against Geller. Let's see, can anyone guess the result??

A very brave effort by Joshua, but at every turn, the tactics always favoured the GM. Strange, that, don't you think? If only there was someone in the club who had beaten GM Hebden. Now, wouldn't that be something!?