Our normal Thursday evening regime of high quality social chess was rudely interrupted on November 6th, when a bunch of blokes off the telly elbowed us aside as a Celebrity Quiz Match was staged at The Royal Oak. Attracting a near full house, the self styled "Dream Team" was in town to play against local stars "The Usual Suspects". The evening was part of the prize the local team had won for triumphing in a nationwide Great British Pub Quiz competition. As the jovial compere joked, second prize was a visit from (ex ECF President and Egghead) CJ De Mooi, while third prize was two visits from CJ.

The TV celebrities are seen below during their own internal battle to select a champion to take on the locals' own champ in an individual head to head to find the evening's "Mega-Brain". 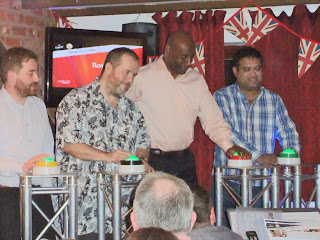 From left to right, the Dream Team comprised:-﻿

1) Mr Somebody, from Educating Yorkshire - never seen the programme so no real idea who he is or why a teacher was in an all-star quiz team. But as long as he's an inspiration to the kids he's a winner in my eyes.
2) Pat Gibson, from Eggheads - a quiz legend who's won almost every quiz show you could think of. Usually more than once!
3) Shaun "The Barrister" Wallace, from The Chase - very sociable guy (who was formerly in the legal profession, rather than a coffee maker at Starbucks if you're in any doubt).
4) Paul "The Sinnerman" Sinha, also from The Chase - very clever guy with one of the worst nicknames ever.

Over a number of exceedingly difficult rounds the Royal Oak locals regularly outscored both The Dream Team and the "hors concours" KCC All Stars who wisely sat well to the back of the room to hide their ignorance. Despite reaching a peak strength of 9 people, we were unable to score more than 6/10 in any round, while the two heavyweights were clocking up 8 or 9 each time.

Some of the questions were VERY hard - a fact confirmed by our own quiz supremos Bernard "The Accountant" Rogers; Joshua "The Mathematician" Pink; Paul "The Powerlifter" Lam; Nick "The Doctor" Mottram; Phil "Mr Croquet" Wood and Roy "The Northerner" Watson. We were definitely Vanarama Conference standard compared to the Premier League quality of the two competing teams. At the end of the night, the Royal Oak's finest had vanquished the Dream Team, and their star man had also scored a thrilling 10-9 individual win over The Sinnerman to secure The Mega-Brain title. (Though unlike me, neither of them knew that the horse that came second to Desert Orchid in the 1989 Cheltenham Gold Cup was Yahoo.)

Many congratulations to The Usual Suspects for a stunning double triumph and an amazing breadth of general knowledge - delivered at a speed which would have done credit to a 1 minute bullet game. Also thanks to our genial landlord Simon, for putting on an excellent event, though some of our more fundamentalist members were disappointed that the clocks and sets had been removed for the evening and no late night blitz session was possible. After three successive nights of league matches I was, by contrast, mightily relieved at the complete absence of any chess boards. And as I had a rotten headache this morning, I'm pretty sure I had a very good time.

But above all else - welcome back to Roy. Thursdays haven't been the same for the last couple of months, but thankfully he has now returned from the distant wilds of Lancashire to the altogether more convenient wilds of Fen End!
﻿