I've just finished my Round 5 game, in which I played GM Lutz Espig in the England 2 v Thüringen match. In his heyday (2505) he would probably have beaten me giving a 30 board simul, but anno domini have seen his rating slide down to 2263. But he's still a GM, so when he offered me a draw on move 21, who was I to decline?? In fact the position was absolutely equal according to Fritz, and not a lot really happened, as you can judge for yourselves below. I was marginally worse at times, but the game never really took off.


All other boards still in play as I write, but we're doing rather well and hopefully shouldn't lose against the 7th seeds.

England 1 are walking all over Obuchiw (a Ukrainian team full of IMs) to get their challenge back on track, while the top board encounter between Iceland and Armenia is a real heavyweight struggle with all e games still in play when I left the tournament hall.

And who says Germans don't have any sense of humour? This piece of street art says quite the opposite! How it made me chortle! 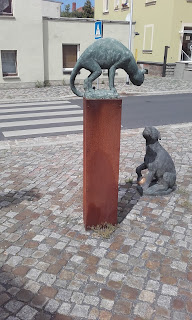