Greetings dear chess friends (that’s how we speak over here!), from the 4th World Seniors Team Championships in Radebeul, near Dresden. I have the enormous honour of playing for England 2 in the Over 50 section of this 9 round swiss tournament. (BTW, this honour is available to anyone prepared to fork out for all the costs!) I couldn’t quite make it into the England 1 team of Nunn, Speelman, Hebden, Arkell and Flear!

The trip has already been rather eventful so far, in both positive and negative ways. First the trip over was rather fraught. Facing an already tight connection in Amsterdam, I was not pleased that we took off 15 minutes late, and then took another 15 minutes to get to the terminal in Schipol after landing virtually in another country and taxiing for miles. I then had to make a mad dash from one end of the terminal to another, and made the onward flight to Dresden by the skin of my teeth. Regrettably, my suitcase didn’t, leaving me with the clothes I stood up in, plus a laptop and a mobile phone – but with no way of recharging them. Thankfully the case arrived about 30 hours after I did, and I am now fully functioning again – except that the internet connection in the hotel is dodgy, and so are the sockets in my room, with only 1 seeming to provide any reliable access to electricity! Could this place actually still be in the DDR?


But enough of my meanderings, what about the chess, I hear you scream?! OK, yesterday we kicked off just after 15.00, with a first round match against Danish club SK 1968 (from Aarhus), and with me playing white on Board 3. My opponent was rated 1926, but I couldn’t help noticing he’d been over 2100 a few years back. Incredibly, the game followed a line I had played only a couple of weeks back until about move 15. The game was very complex, and although I had a small edge from the opening, the balance seemed to be swinging between the players as we traded inaccuracies. Then came the crunch. With 2 minutes on my clock, and in a slightly better position, I needlessly sacked an exchange to get a bishop lodged on f6 in front of his king. I thought it was mate, but with best play it should have just led to a lost position for me. Luckily, my opponent missed the right defence and instead walked into an enormous cheapo based on a weak back rank and a queen sacrifice by me. I won a rook and he resigned a piece and position down. The team chalked up a 4-0 win and everything was hunky dory.

Today we had a local derby match against Scotland. It looked like being another 4-0 sweep at one stage. It was my turn to have a rest today (two games in a row would be so tiring, darling!) and by the time I arrived at the board after a leisurely breakfast (all rounds from now start at the unholy hour of 9.30) we were already 1-0 up, as our star board 1, GM Jim Plaskett had won with Black in about 30 minutes. I then went off for a long walk around this very pleasant town (probably about the size of Kenilworth, but with a rather better river and three railway stations!) and arrived back just in time to see us go 2-0 up. We were a pawn up in one of the remaining games, and a piece for 2 pawns up in the other. But regrettably, things then went wrong. On board 4 our man walked into a knight fork, and on board 2 the Scottish player managed to swap off all the white pawns and advance his one remaining pawn far enough down the board to get a draw, with R and pawn against R + B. So just a 2.5-1.5 win, but honour upheld against our northern neighbours.

I should be back in action tomorrow, when we play a strong Canadian team, who are seeded 7th (we’re 13th, but that’s almost entirely due to having Jim Plaskett in our team!). Internet and electricity issues permitting, I’ll be back with more news in the next couple of days – especially if they involve me getting any more points!

In the meantime, here’s a little poser for you, which I’ll answer in my next post. Who is this aged but very famous GM, who has one of the sharpest variations of the Sicilian named after him? Come on, I’ve nearly given it away, so I’ll expect a 100% success rate on this one. 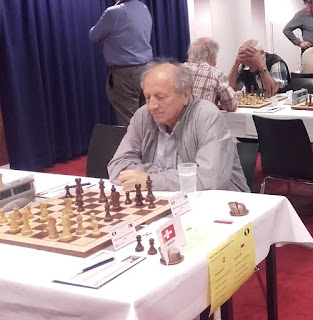