Alighting at the station near my self catering apartment in Torquay on Saturday, I was struck by the fact that it was named after not just one, but two famous chess players. While the locals pronounce it Tor, there's no doubt in my mind that it should be pronounced as though it has an e acute at the end, as - for sure - it was clearly named after the legendary Mexican player Carlos Torre, and also Asia's first ever grandmaster, Eugenio Torre of the Philippines. Is it any wonder that the British Championships come to Torquay so often?! 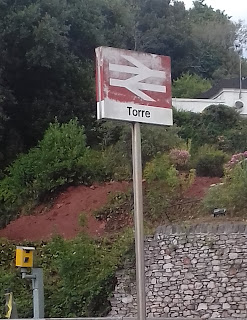 Regrettably, though, its not clear where number two in this series is going to come from, which is why this isn't even described as number one. The KCC Brains Trust did come up with the possibility of Wells, but unfortunately there is no station there anymore! I once travelled to and from Norwood Junction station every day, but I never thought to take a picture of the station sign. Silly me! I doubt I'll be back there in the near future (ever?) to remedy this omission. Any other suggestions would be most gratefully received.

Eugenio Torre was Asia's top player for many years after becoming a GM in 1974, until overtaken by the hordes of Chinese and Indian GMs who eventually followed his trailblazing path. Here is a game where he absolutely slaughtered a young Ian Rogers.

Carlos Torre, after whom the Torre Attack is named was a tragic figure. Although he died as recently as 1978, he was hospitalised for much of the last 50 years of his life after suffering a mental breakdown in 1926. His last tournament games date from that year. At his peak (1925/26), the Chessmetrics website ranked him 8th in the world. As well as leaving a chess opening as a legacy, he also left the world a truly spectacular game - featuring the famous Windmill combination - in which he destroyed former world champion Emanuel Lasker, with a queen sacrifice, which was followed by the immortal windmill sequence in which a rook mopped up almost the entire Black army with a series of discovered checks.

How lucky I came to Torquay by train, as otherwise we wouldn't have enjoyed this immortal game.