Last Thursday saw round 4 of the KCC Online Speed Chess Grand Prix, with a first Blitz event - introduced at the request of the club's younger members. And it was indeed youth to the fore, as Jude lived up to pre-event expectations to occupy - as forecast here! - first place, in a field of 9. I chased Jude hard to finish two points behind, just pipping Joshua for second by winning our last minute encounter, when we both berserked in desperate search of an extra point. Improbably, Algis - not exactly renowned for his speed of play - also decided to berserk in one game, but the loss of 90 of his 180 seconds, as well as his increment, did not really play to his strengths! I doubt he will make that mistake again!

Quite a shake-up in the Grand Prix standings, not least because Lionel, previously lying 2nd=, failed to make it to the start line. I guess he took French leave! Noah made his Grand Prix debut and chalked up three good wins, as did Matt, who somehow managed to get through 16 games in 90 minutes. This was a pace even Jude couldn't match. Being an old slow coach, I could only finish 11 games.

So here is the updated table after Round 4. 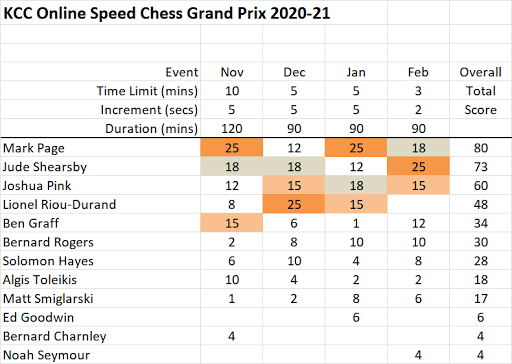 Round 5, in March, will see the changes rung again, as we will have our first ever Chess 960 event. With opening prep removed from the equation, success will be down to pure chess ability. Oh well, it was nice being in the lead for a month or two!

More online news - the KCC stranglehold on LDCL online events came to an end at the weekend, but Bernard R and Ben finished a more than respectable 3rd and 4th in the latest Blitz tournament to fly the flag for the club.

And if you want any proof that these are abnormal times (though I imagine you've probably gathered that, by now) I can report that I have somehow got my Blitz rating on chess24 to the ludicrously high level of - exactly 2500! Talk about rating inflation. To put this in perspective, though, this is some 900 points below the top ranked Blitz player on chess24, England's very own David Howell, who currently weighs in at exactly 3400! (With Magnus down in 8th place at a measly 3200 - what is it with all these round numbers?!)