Where Does the Time Go?

Its just over 9 months since I put together an article on the amount of on-line chess being played by KCC members - and how much time was being spent/wasted (you decide!) in the process. You can read the original article here. Well, I thought it was about time we caught up with developments since last June and - taking a leaf from the notebook of our leader - this update will be data driven!

Again I have to stress that this analysis is based solely on activity on Lichess, mainly because that platform presents the information in such a user friendly way that it makes this task very easy. So if you want to hide the amount of time you spend playing chess online, you just need to use a different platform, and no-one will be any the wiser!

We start with the Marmite category, Ultra-Bullet. Last June only 4 KCC members had even played this Godless format, and 9 months on, this number has risen to 6. Ben dipped his toe in the water and played 5 games, while Noah played just the one. I think we can deduce that they are not converts to the 15 second game. Matt has also turned his back on Ultra-Bullet, and even Billy seems not convinced that he should be wasting his time on this random mouse clicking. But - oh dear, oh dear - Jude and Paul clearly remain smitten, playing 3,265 games between them in the last 9 months. We need to help them fight this addiction! 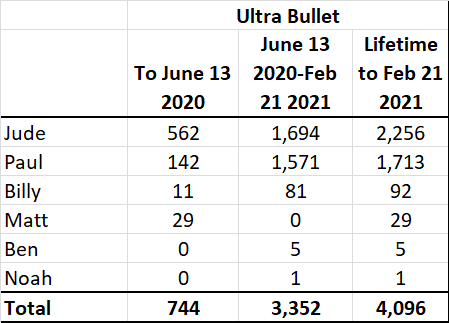 There are four newcomers to our Bullet activity list, led by Solomon, who didn't even exist (as far as KCC is concerned!) back in June 2020. Andy W was somehow left off my earlier analysis, as I'm sure he was an on-line aficionado before most of us, while we can also now include Noah and Ed as active Bulleteers. Well, maybe not Ed, as a single game hardly counts. And Lionel has clearly decided that Bullet is not for him, and has given this format a wide berth in recent months. But really, there is only one headline in this section, and that belongs to Paul - who has played about 1,000 more bullet games in the last 9 months than everyone else in the club put together. And given that Jude and Ben alone have played almost 4,000 games between them in that period, you should by now be able to see that we are talking big numbers here! In fact, KCC members have now played more Bullet games than any other form of chess. And there was me thinking we were chess purists! 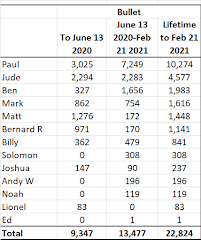 Paul also leads the recent activity table for Blitz chess, though here he has been pushed all the way by Matt, who has consequently easily retained his overall "lifetime" lead in this category. Strong showings from Joshua and Ben here - don't you just love that home-working experience!? Any hopes that Solomon may have had of climbing the table have probably been scuppered by him getting a non-home working job. Shame after being a new chart entry at number 7 for the June-February period! 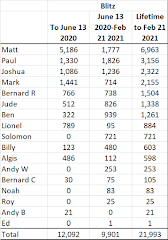 Matt may be well ahead in the Blitz category, he has been knocked off the top rung of the Rapid ladder by that long forgotten KCC member, Roy. He still won't play against his mates on a Thursday evening, or turn out for the club in friendly or league matches (all of which are played at Rapid time limit!) but he certainly will play - lots and often - against random dudes from around the world. With the result that he has played 3+ times as many rapid games in the last 9 months as anyone else! Was it something we said? 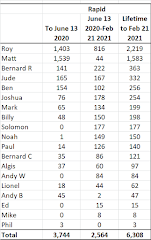 All this data-work is very tiring, and I'm running out of steam now - but we've still got three more tables to go, so I'd better get a second wind. We're now on to the odds and sods category, which embraces Classical and Correspondence time limits, plus all the variant forms of chess offered by Lichess, such as 960, Atomic, Horde, Racing Kings and more. (No, I don't know what some of them are, either.) Small numbers are the order of the day here, with only Solomon and Billy managing more than 100 games in the last 9 months. Consequently Matt has maintained his clear lead in this rather unglamorous and ill defined sector. 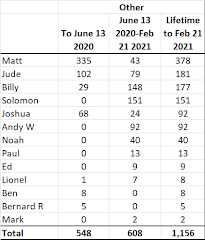 And so what do you get when you put all these formats together? Who is the big cheese of KCC online chess? It's Paul! He has managed to turn round a deficit of nearly 3,900 games compared to Matt into a lead of almost 5,000 games! In just 9 months!!  And Matt's second place is under threat from Jude, who has more than halved his deficit, and at current rates of activity will overtake Matt well before the end of the year. I am also in trouble as long as Ben keeps working from home, and my 4th place seems unlikely to last into the summer. 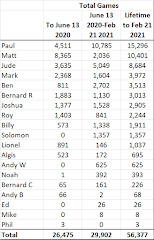 Rather worryingly, Lionel seems to be losing his enthusiasm for online chess - either that or he has defected en mass to chess.com. Andy B is a totally lost cause as we already knew - in fact I'm surprised to see he's even played 2 games in the last 9 months! -  while Phil must ask himself over and over, "Why did I ever play those three games?" But at the other end of the table, we can now all see why Paul is so busy these days - its not the online coaching, its the online playing that is taking up all his time! Or is it? Because we are still one table away from completing our data report. And its the most eagerly awaited table of them all, as we finally get to see how much time everyone has wasted playing online. Lights out; drum roll; suspenseful silence; and the winner is ............ Matt. Of course, its Matt. He had such a big lead over the rest of us, having been a particularly early fan of online chess, that he is not going to be caught for a long, long time. (If ever!) He still has 39 days of online activity in hand, so despite Paul's sterling efforts in the last 9 months, which have seen Roy knocked down into third place, it will still take him around 6 years to catch up!  Impossible to know how much of Solomon's life time total occurred during the last 9 months (my guess is quite a lot!), so he has been an impressive lockdown performer, and so have Jude and Roy. 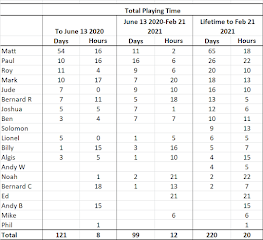 But clearly a lot of our members could up their game and waste a lot more time playing chess. In fact, its disturbing to see how little time some of them spend - what else have you got to do, guys?? OK, maybe don't answer that. Anyway, the target you should aim for, as recommended by many independent experts, is to spend about 7 days 20 hours per nine month period playing chess online. This will give you the perfect life:chess balance. Any more and you are dangerously addicted, any less and you are simply not showing sufficient commitment to the game. Amazingly, I seem to have exactly hit the optimum. Excellent. But its only what you would expect from the most well adjusted individual in the club, I suppose. But let that be a guide and inspiration to you. Just try and be more like me, and happiness and lifestyle satisfaction will undoubtedly follow! Meanwhile, a target for the club collectively is to achieve a total time spent playing online of one year. I reckon another 12 months of lockdown and we should be there! Won't that make us proud?!

And I leave you with a word from The Grateful Dead, who were obviously very early practitioners of online chess given the lyrics of "Uncle John's Band". Because as the clock strikes midnight and you keep telling yourself, "one more game; just one more game", who hasn't wondered, just like them, "What I want to know is, where does the time go?"