So first there was the Walking Tour of all the premises ever used by KCC for matches and club nights (see post dated May 12, 2020), but now its time to expand the geographic reach and ambition of this website. So how about a series of articles that link all the places which share a name with KCC members, past and present? For no purpose other than to amuse me on a wet Bank Holiday Monday after what seems like 10 years in lockdown. Besides, who doesn't like a nice drive in the country?

First stop from Kenilworth (after 29 miles/45 minutes) is the Staffordshire town of Aldridge - though technically it is now part of Walsall, and so in the West Midlands. Besides being named after our revered former Chairman - and lately D team skipper - Chris, the town (population of around 27,000) is famous for ..... well nothing too dramatic it appears. Multiple paralympic Gold medallist Ellie Simmonds went to school here, as did Colin Charvis, captain of Wales at Rugby Union. But that's about all I've got!

It's back onto the M6 now, and we continue heading North, and after 67 miles/1 hr 30 minutes we arrive at Mottram St Andrew in a very affluent part of Cheshire. A prominent former resident of this small village (population 493) was the inimitable Mario Balotelli, whose home here was the site of an unfortunate firework incident! I'm sure its a much duller, though possibly safer, place without him. Remarkably, though, this is not the only place named after our long standing club doctor, as in another 32 minutes (22 miles) we find ourselves entering Mottram in Longdendale. This village is now part of Tameside (Greater Manchester) and is seemingly in dire need of a by-pass! It was the home of LS Lowry for some 28 years up to his death in 1976, and he is commemorated by a memorial in the village.

Well that's quite enough Mottrams, I think, as we have a long journey ahead of us now. (103 miles and 1 hour 55 minutes will bring us to Pickering, a North Yorkshire market town of some 6,800 people, boasting a splendid castle (Snap!) and a heritage steam railway. A controversial choice, I know, given Carl's abandonment of KCC and his homeland in search of career gold in the Far West of the good ol' USA. But he was a club stalwart and Board 1 for a number of years, and is a former winner of the LDCL Blitz Championship. I could mention the only other KCC player to have annexed this title, but modesty forbids.

We now turn south and face another long drive (149 miles/2 hrs 43 mins), but its worth it, as this brings us to the Leicestershire village of Shearsby. The population at the 2011 census was just 240, but it looks a nice place and as well as honouring the mighty Jude, the village pub also has a chess connection, presumably having been named after GM Murray Chandler! It has an annual beer festival in July, and if it wasn't in such an inaccessible place I would have suggested a club outing! 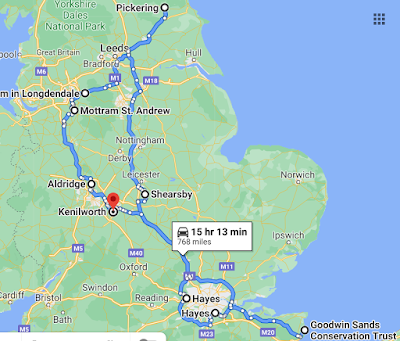 After another 96 miles (1 hr 49 mins) the M1 and M25 take us to Hayes, in the London Borough of Hillingdon. (Another controversial selection, but despite never meeting any other member of KCC, Solomon has become an online stalwart over the last 12 months, so fully merits his inclusion in my opinion. Which, after all, is the only one that matters here!) We are in the big time now, as the 2011 population was a massive 83,564 - making it almost as big as Nuneaton. Yes, really - that big! Hayes is best known as the home of EMI, and it was here that the Beatles records were pressed. It is also the site of the UK Head Offices of Heinz, United Biscuits and Fujitsu, and notable former residents include William Byrd (the Father of English music, and someone whose works I bet Solomon has sung!) and George Orwell. Other famous folk to have either been born in Hayes, or been brought up there, include Olympic gold medal winning boxer Chris Finnegan, Bond girl Jane Seymour, Barry Foster (Van der Valk)  and BBC Director General Greg Dyke. But football provides its greatest claims to fame. Glenn Hoddle was born here; Ray Wilkins grew up here, and both Les Ferdinand and the great Cyrille Regis played for Hayes FC before they hit the big time. So basically, we've got a lot to thank Solomon's eponymous town for!

But maybe he's pushing his luck a bit, since after a further 49 miles (1 hr 7 mins) we find ourselves in ...... Hayes! Again! This time in the London Borough of Bromley, which is chiefly famous for being the long term home of my brother. Oh, and the birthplace of Pitt the Elder and Pitt the Younger, I suppose.

That's more than enough from Solomon, I think, so we should press on to the last stop on our England Road Trip. And its a bit of an anti-climax I'm afraid, because after 77 miles and 1 hr 34 mins we arrive at Walmer, in Kent. Now if you're thinking that there has never been a KCC member called Walmer, I'd have to agree with you, but regrettably 32, The Beach, the home of the Goodwin Sands Conservation Trust is the closest we can get (without getting wet!) to the treacherous sandbanks located 6 miles offshore, which were obviously named after our past and now present member, Ed. To spare Ed from unjustified criticism, I should probably draw a veil over the fact that more than 2,000 ships have foundered on this maritime danger spot. I should have, but I didn't.

All that remains now is 185 miles, and 3 hrs 18 mins later we are back home, weary but safe and sound, in Kenilworth, having completed our KCC England Road Trip of 768 miles in just 15 hours 13 minutes. Plus "comfort stops", I guess. A pretty long journey - but nothing compared to what's in store for us when the KCC Road Trip goes international in the next episode! So if you didn't get a mention this time around, don't despair just yet, as in addition to some old friends, we'll meet plenty of new ones along the way.