Time for our second journey around places with the names of KCC members, and where else would we go than the USA, the spiritual home of the road trip? But its a mighty big country, and there's no way we can polish this off in a single bite - so this will take two or three separate trips. The first is going to focus on the North East of the country, where in just 26 hours we can do a circuit of 1,417 miles and take in no less than 7 eponymous KCC stops. We won't quite "cover all the North East states", but we'll get close enough to justify including this superb song by The Boss.

There's really no place else to start than Kenilworth, New Jersey. A Borough of just 8,000 people it is home to the other Kenilworth Chess Club and was once closely associated with Sam "The Plumber" DeCavalcante. Who wasn't really a plumber. But I don't think we should dwell on that fact, do you?

Given we have a long journey to make, its a bit of a surprise that our first stop comes up after just 20 miles/26 minutes, when we reach Paterson, NJ. This is a big place at close to 150,000 inhabitants, and can boast comedy/film legend Lou Costello amongst its famous sons. Beat poet Allen Ginsburg lived here as did David Prater, half of the soul duo Sam and Dave, and boxer Ruben Carter, whose wrongful conviction for triple murder inspired Bob Dylan's 1975 epic song, "Hurricane", and the 1999 movie of the same name, with Denzel Washington in the title role.

Now the miles start clocking up, as its a 3 hr 8 minute drive (165 miles) to our next stop in Morris, New York, a small town of about 1,800 people in Otsego County. Far from being named after our own Will, the town remembers General Jacob Morris, son of Lewis, one of the signatories of the US Declaration of Independence. Wikipedia lists five notable former residents, but as I've never heard of any of them, we'll continue our journey, as its another 3 hrs 6 mins and 191 miles to Ward, NY.

This is the most westerly stop on our trip, but with a population of only 350 or so, there's not a lot to detain us here (sorry, Andy!) and we'll head straight out of town and turn north towards Watson. This is a journey of 3 hrs 50 mins/218 miles, but we're still in New York state. Well, I did mention this is a big country, didn't I!? Despite dwarfing Ward, with a population of almost 2,000, there's again nothing special to record here, so now its a case of sorry, Roy and on to the next stop. 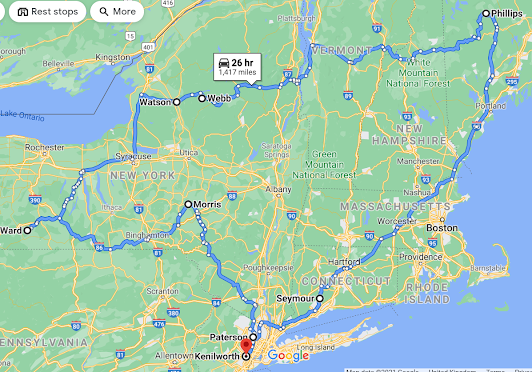 Only 50 minutes/30 miles and we are in the similarly sized Webb, NY. (What is it with all these W's??) Named after a minor railway baron (we're not talking Cornelius Vanderbilt here!) rather than our own Rod, the town also pays passing reference to other KCC members - Solomon is remembered by the hamlet of Big Moose, and Bernard R by Bald Mountain.

Right, you'd better settle down for a long drive now, as we have to traverse a whole state (Vermont) to reach Phillips, Maine which takes us 7 hrs 40 mins/359 miles. Where, in the words of Richard Ayoade, "We're here. But should we have come?" Wikipedia lists 8 notable people - very impressive for a place that currently boasts only 1,000 inhabitants, but ....... well, you hardly need me to finish the sentence. See above.

This is the most northerly point of our trip, and now we head south, south, south for 5 hrs 38 minutes/331 miles (passing through New Hampshire and across Massachusetts) to reach Seymour, Connecticut - thankfully a town of more substance than every where we've been since Paterson. Named after the 36th state Governor rather than our Noah, Seymour is home to 16,500 people, but despite its size, its the same story regarding notable people, I'm afraid! Intriguingly, though, there is a charity here called Seymour Pink. Who'd have ever imagined that?  We could have caught a train here from Grand Central Station, New York (changing at Bridgeport) which would have taken just 2 hrs 45 minutes, but that would have meant missing out on Morris, Ward, Watson, Webb and Phillips which would have been a shame. Or not, as the case may be.

Well, that was fun, wasn't it? So much so, that we'll do something very similar when the US road trips continue in episode 3. So if you haven't had a mention yet, be patient. There's a lot of very small places in the USA and maybe one of them has your name on it!