White to Play and Win

Consider this complex study (M. Page, 2018) and see how long it takes you to solve it. The task is very straightforward - it's White to play and win. 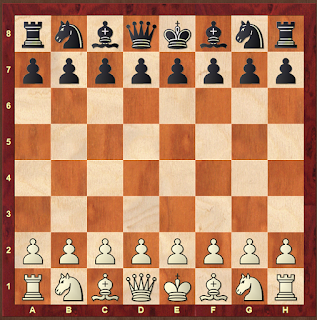 How did you get on? If you were present at last night's A team match against Rugby A, you will have found this to be  a very easy problem, with multiple solutions.  Any of 1 Nf3; 1 e4; 1 d4; or even 1 Nc3 seem to lead inexorably to a win for White. No need for further analysis, they just do! In fact, I really don't understand the problem that Carlsen and Caruana have been having in trying to eke out even a single, solitary win between them.  Mind you, they have been trying to play good moves, which two of our team signally avoided last night. Regrettably, I was one of them.

But while I lost horribly to Jonathan Cox on Board 1, I still somehow did not play the worst game of the evening. That honour went to the normally rock steady Andrew P, who perhaps sulking from finding himself languishing on Board 3 at times this season, went down in excruciating - but rapid - fashion to Simon Turner. I glanced at the position after about 10 moves and noticed to my surprise that Simon was threatening to win a piece by playing Bxb8 (a knight on its home square). Then I noticed he was also threatening to play Qxg7 (only a measly pawn) followed by Qxh8 (a far from measly rook). Surely our man couldn't have overlooked something as elementary as a double attack could he? Surely he had a clever response up his sleeve?? As the game ended soon after as a White win in what can best be described as a rout, you can guess the answers to these questions. Why he didn't play like that for Nuneaton against us in the Coventry League last week, I can't imagine! Still, we're all allowed the occasional off night, I suppose.

We then struck back in rather less one sided games, as first Joshua (against Alan Phillips - nice to see you, Alan!) and then the infrequently sighted Andy B (against Patrick Reid) also proved the power of having the first move to put us 2-1 up. Joshua seemed to play remorselessly against Alan's hopeless clock handing (there may have been the odd good move in there, too, though I can't vouch for that), and Andy finally crashed through when his third or fourth plan of the evening actually worked, though I had a bit of a scare when I saw a knight sac against Andy's king, but luckily it could be ignored and Andy eventually powered in against the Black king on the g file. Any thoughts of a match victory were not realistic though, as I had been slightly worse for the whole game before collapsing appallingly and walking onto a crushing mating attack. Well of course I did - I had the Black pieces. (See diagram above!) Still, as I may have said before, we're all allowed the occasional off night.

So honours even at 2-2, and all four games won fairly convincingly by White!

Ultimately this was a very disappointing result, as on paper we should have won comfortably. In fact, maybe that's what I need to propose at the next League AGM - we play the matches on paper, rather than on the board. That way we can all stay at home and watch the telly, while avoiding damaging calamities such as befell two fine fellows last night. Still, in case I haven't already mentioned it, we're all allowed the occasional off night!